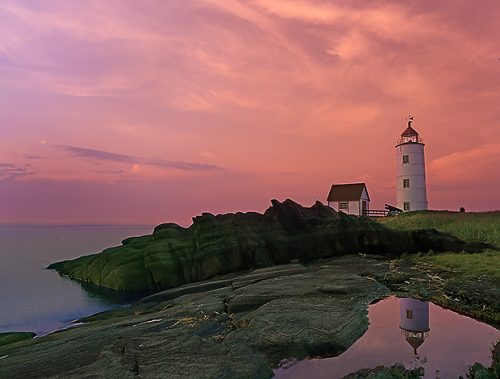 Lighthouses are part of Old Quebec heritage and were the guardians of the maritime activities and adventures when navigation technologies were not mature and modern. These lighthouses played a pivotal role in these adventures and are still standing tall with their charismatic appearance on the rocky shore of St. Laurence river and islands till Gaspe peninsula.

One of them is 200 Years old Ile Verte Lighthouse on Île Verte in Notre-Dame-des-Sept-Douleurs, Quebec, Canada.

Learned from Wiki before my travel that the lighthouse was completed in 1809, it is the oldest lighthouse on the Saint Lawrence River and the third oldest in Canada.

I was thinking from some time to spend some night near a lighthouse to see the grandeur of these old architectures but never got a chance until when I booked Ile Verte Lighthouse for 2 night stays. The 200 years old lighthouse now provides quite a few air-bnb like lodging facilities. Couple of them are inside the lighthouse and few of them are nearby caretakers chalets. Grouped with one of my best friends, we started one night to reach Rivière-du-Loup.

Rivière-du-Loup is 6 and a half hours drive from Ottawa. But we started with enough time knowing that we would take some breaks. The drive was through Montreal and Quebec City and we reached the ferry at the dawn of the next day. It was quite foggy and we had an hour time to cross the river.

While waiting I noticed a couple of American Goldfinch playing nearby and hunting for worms. Though I didn’t have any telephoto lens but managed to get some pictures of these little beauties. 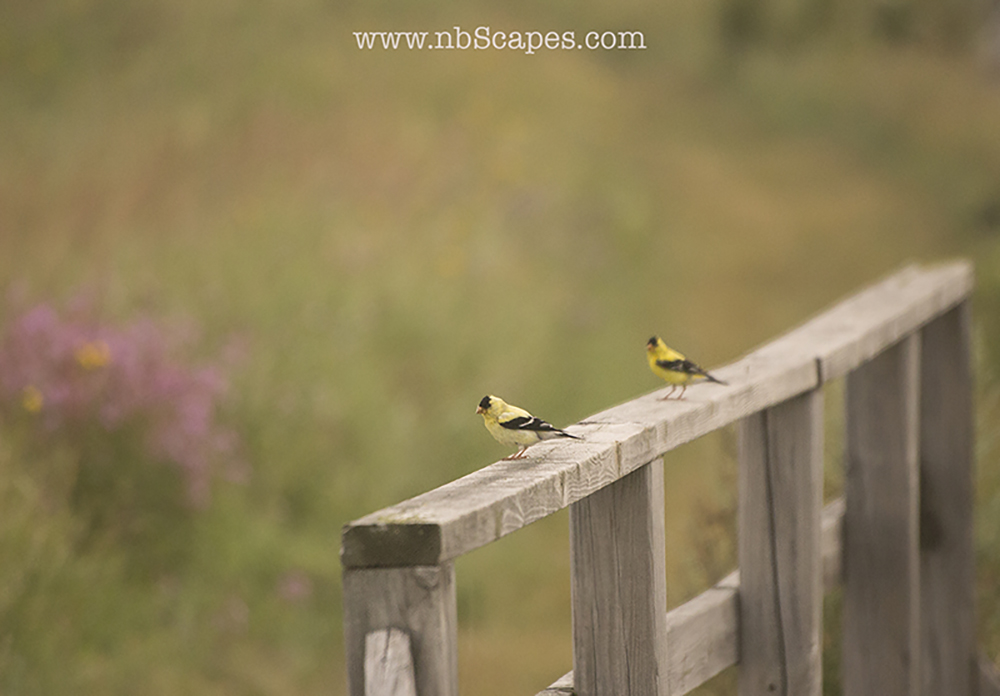 And then with a whistle, a big ferry arrived.

It didn’t take a long time to go inside the ferry with our vehicle. It was an experience to park the vehicle inside the deck of the ship. 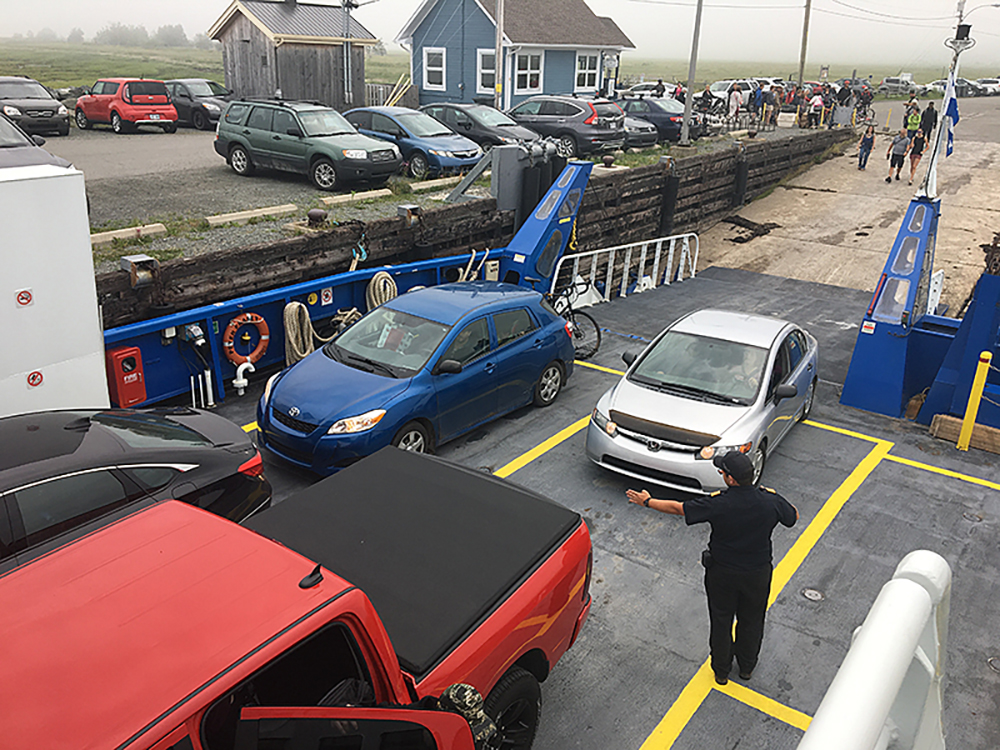 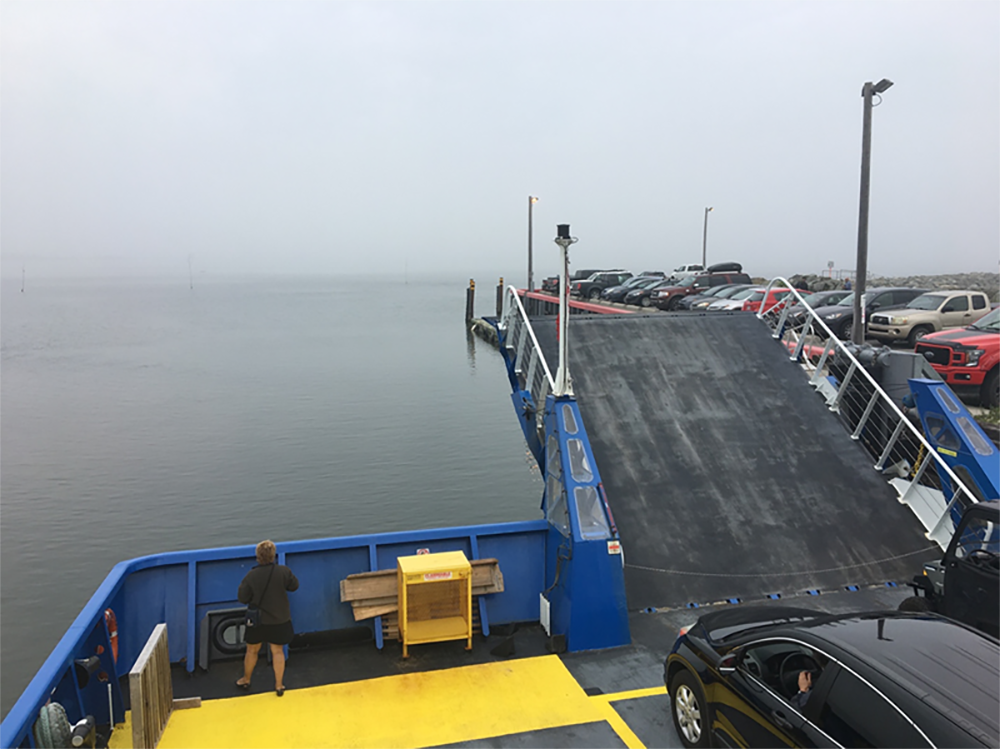 When the ferry started with a long whistle, a thick fog started rolling and covering the river. Few minutes everything was covered but the expert captain started his boat in thick fog.

I was enjoying every bit of that voyage while others were either seating inside their vehicles or standing in some designated areas.

It took around 30 minutes when we realized that the shore of the island was appearing from the fog. The experienced captain tagged the boat with the wooden platform with accuracy. We started our cars and got out form the boat. Our destination was the lighthouse which was the opposite side of the island. It was a nice scenic drive and we reached our destination in 15 minutes. The caretaker welcomed us warmly and showed us our designated rooms. We were tired from the overnight journey but didn’t want to waste any time in sleeping.

We came out of the room and looked carefully to the lighthouse – what a white beauty it was. From its historic note, we understood the lighthouse is guiding the ships since 1827 for 134 years. 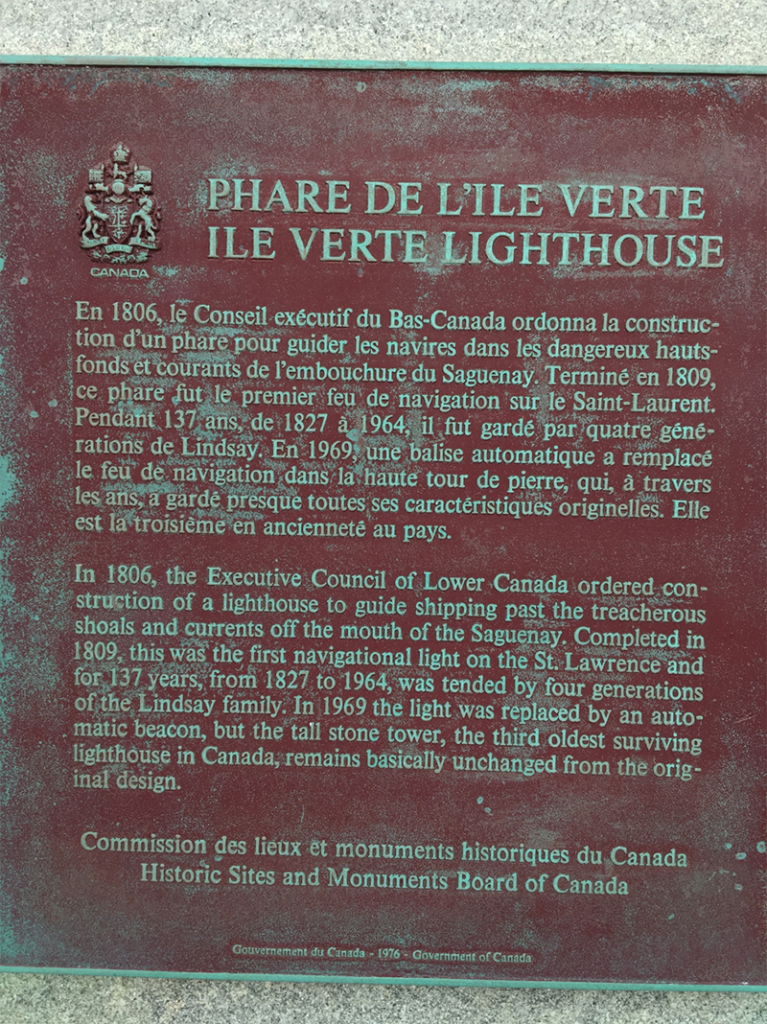 Though we were a bit tired of overnight driving from Ottawa, we didn’t want to waste much time. We started exploring the island and found some beautiful places.

The time went in exploring the island and having some food before we came back to the lighthouse in the afternoon to take some rest. I wanted to have some photography session in evening and night so rest was essential at that time. When I woke couple after a couple of hours nap, the island was clear from the morning fog and the island was having some perfect light for photography.

This time I flew my drone to capture some aerial perspective. There was strong wind coming from the seaside, but when the DJI Drone took off I found the machine and its camera system are quite steady. The drone gave me some superb perspective of aerial photography what I have started very recently. 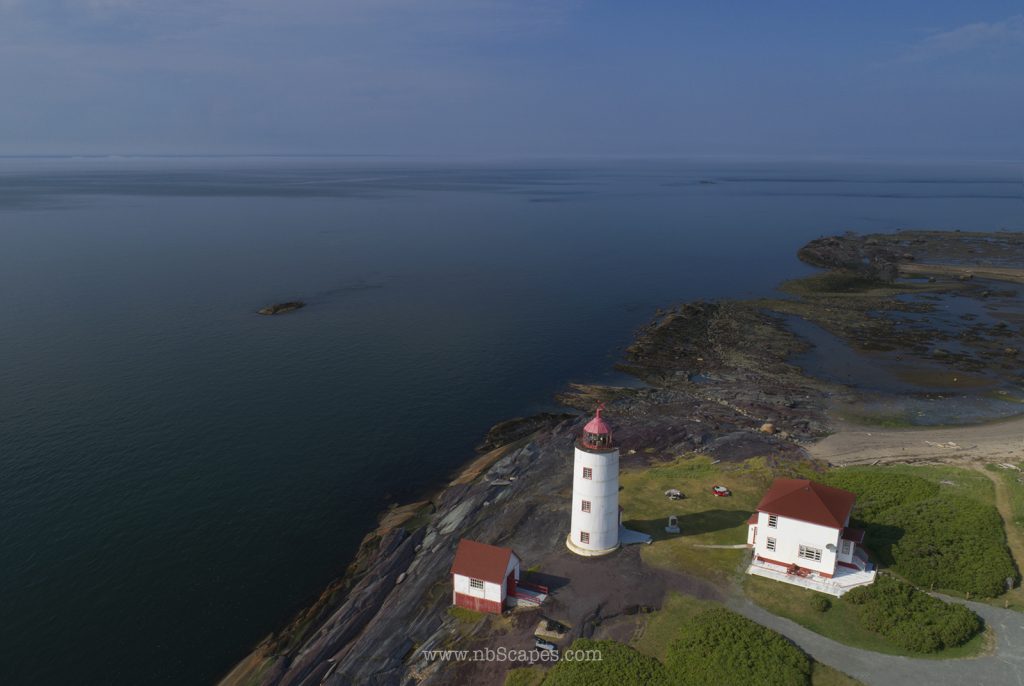 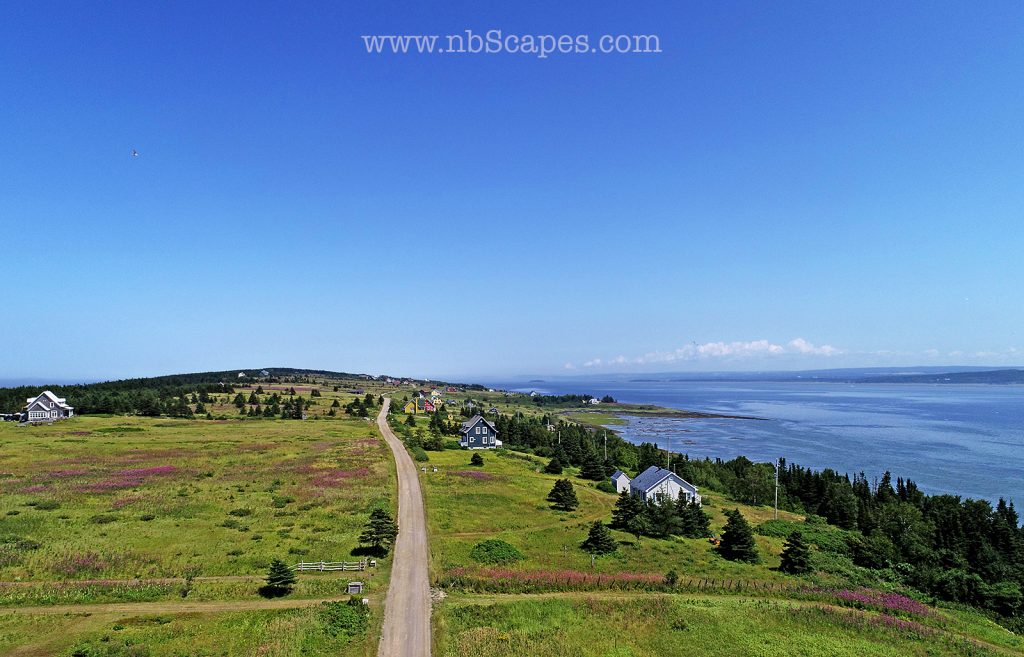 After some flying session, I was eagerly waiting for the sunset. I wanted to see how the west horizon looks like while the sun touches it. After waiting almost for an hour the light started becoming soft and the sun was at the horizon. And then I enjoyed some beautiful sunset over the horizon. 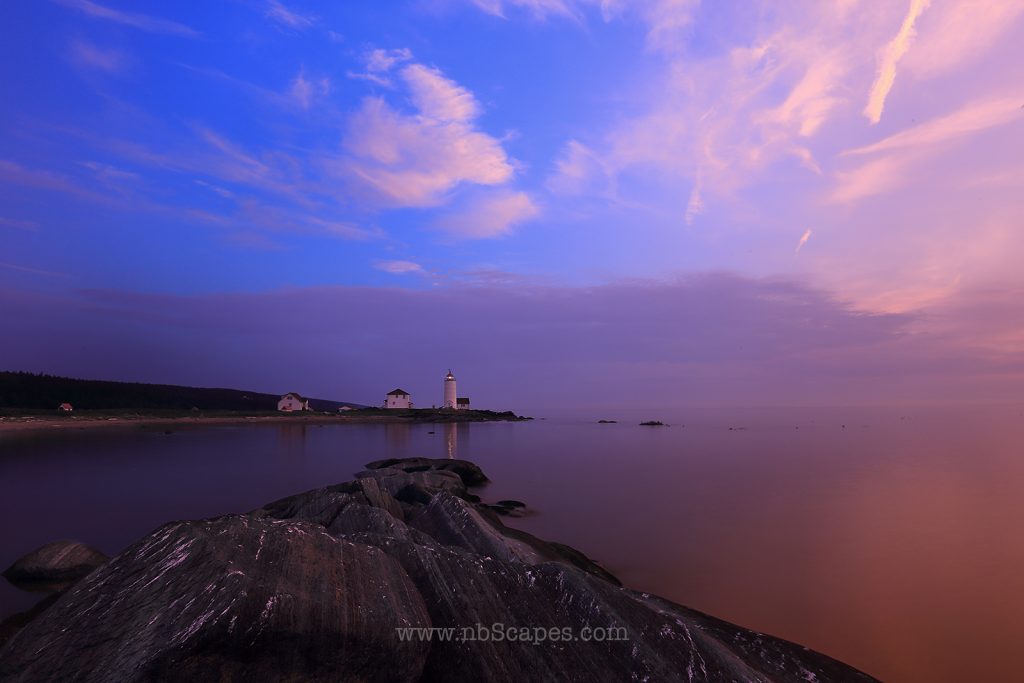 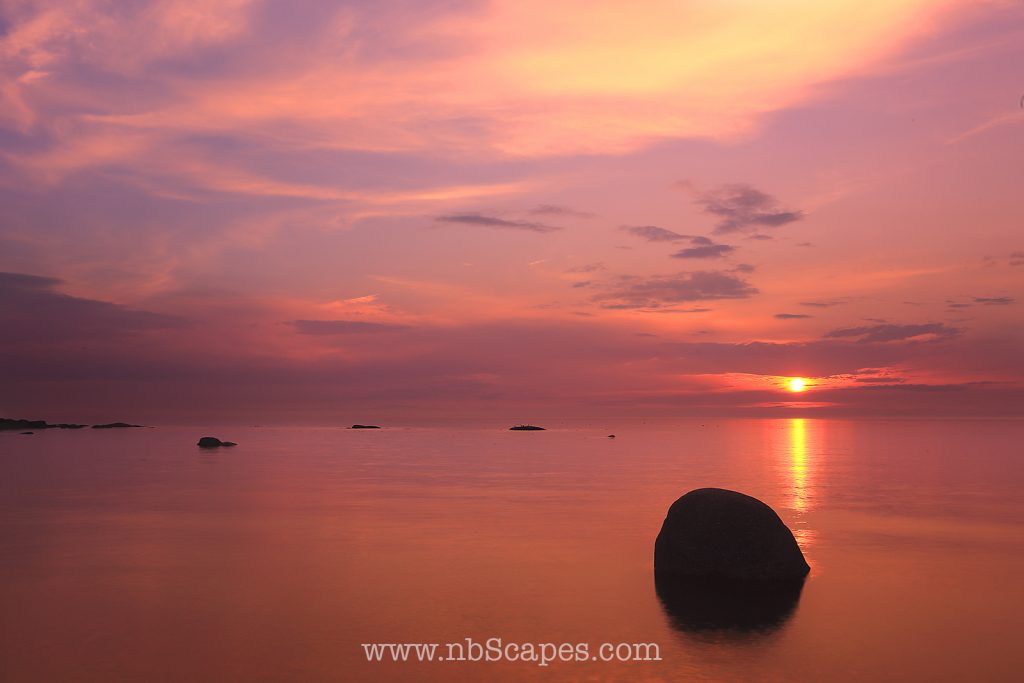 There was no one except my friend and I and the color in the sky were changing dramatically. And when I look at him I found an interesting frame of a photographer waiting for his best shot amidst of nature.

A few more frames which I was able to make that memorable evening. 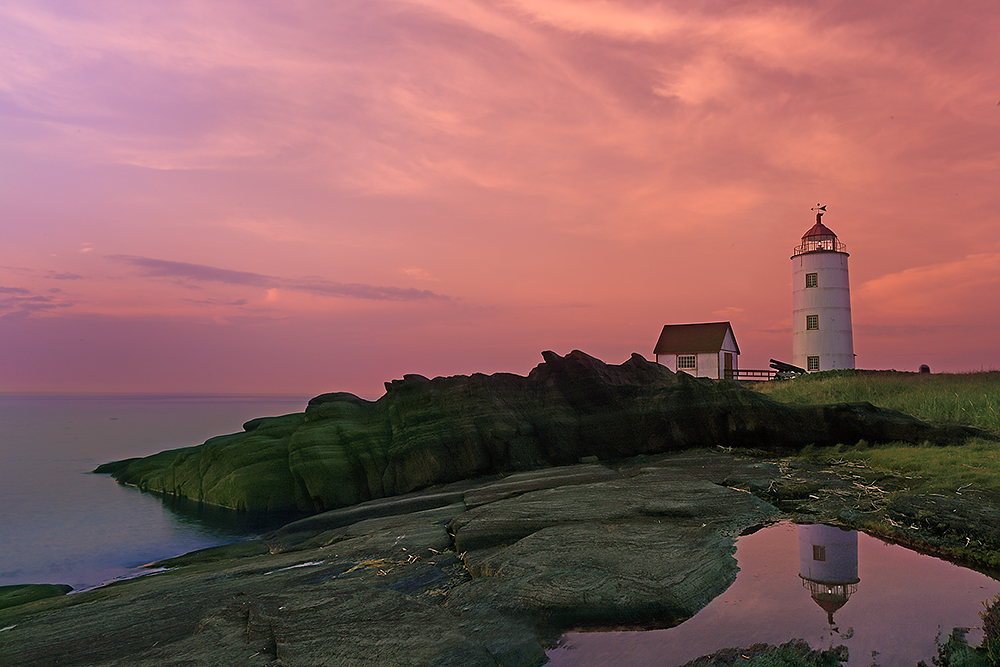 Soon after this evening photo session, the night arrived on the island with real darkness. At the dinner table, we were very hopeful to see the stars in the sky and was planning for some perfect stargazing and star photography but again fog started rolling out on the island. And in half an hour the island was covered by a thick cover of fogs.

I remained awake almost the whole night in the hope the fog will disappear but when I hit the bed at 3 in the morning the fog became denser than ever.

The next morning was to drive back to Ottawa again to the normal daily life with a promise to come to this amazing place again to explore more.

Some photos from that night. 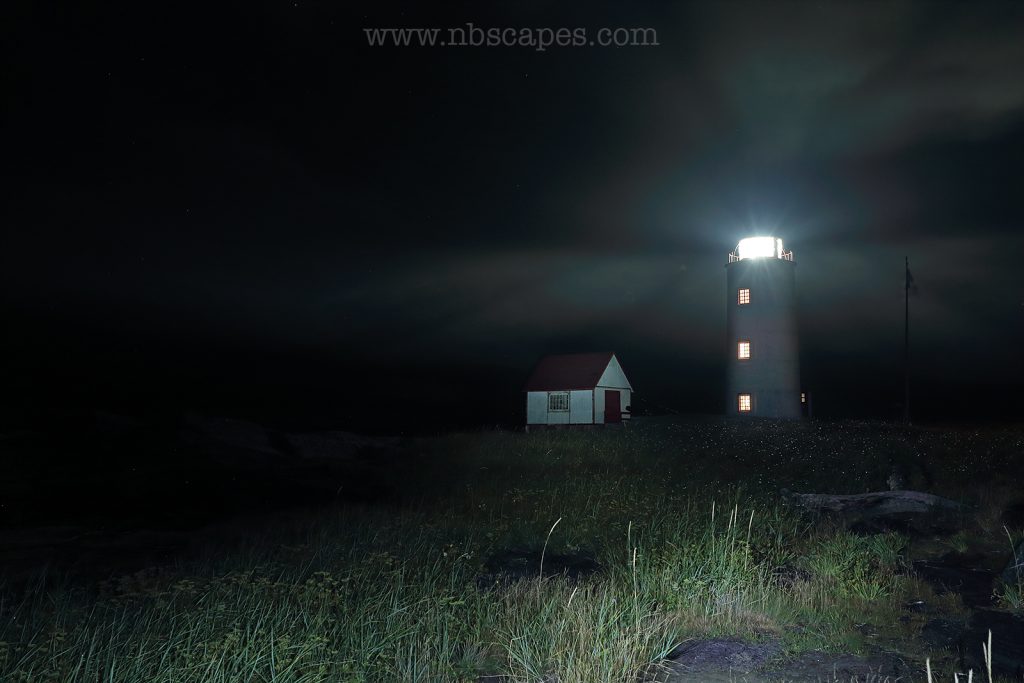 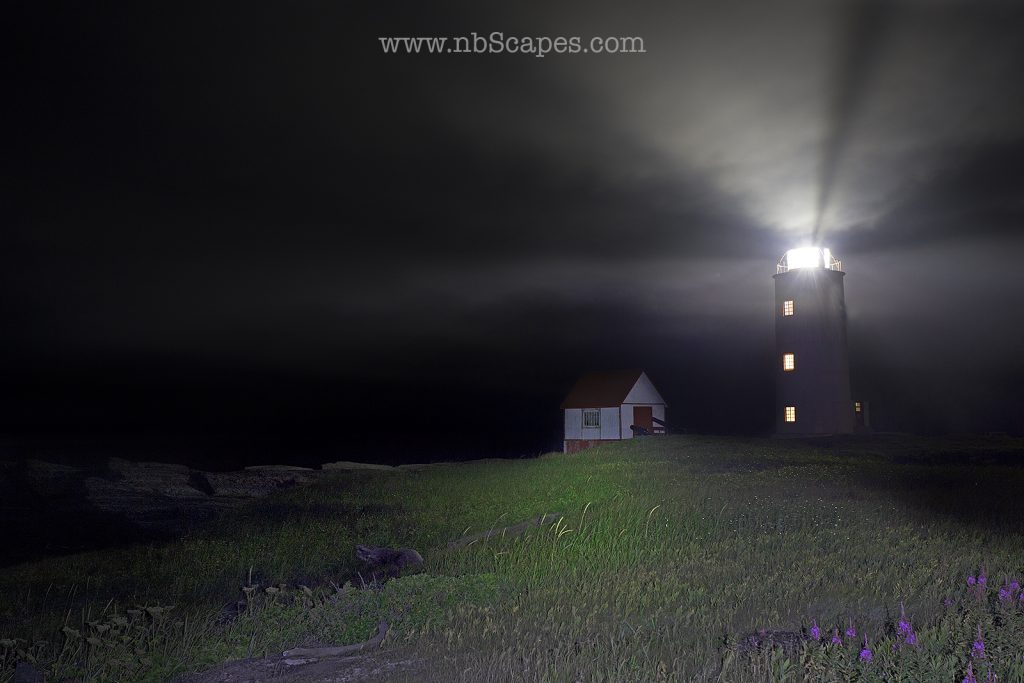 Some important Travel Information if anyone wants to travel this place

The best way to travel to Rivière-du-Loup, Quebec from Ottawa or from Montreal is by driving a car. There is no rail service or I have not seen any other transport service to reach Rivière-du-Loup Boat station.  One can park the car at the ferry terminal or take the car by the ferry to the islands.  To take the car to the island the charge of the ticket are $ 47 for cars and $7.10 for Motorcycles. A car should not exceed in size of not exceeding 6.4 m in length x 2.44 m in width. Buying tickets in advance is advisable and can be done over the phone. Advantage of taking the car or motorcycle is to cover the entire island which is quite big.

The island has a handful of restaurants. The cuisines are good, tasty but maybe a little expensive than normal which is understandable. If anyone staying at LightKeeprs rooms, food can be available there also.  Confirm while booking.

This is a place for the pure nature lover; no city hustle-bustle. You can roam the entire island by feet, bike or by car. Very scenic everywhere. Just enjoy the nature. At night when the lights are on in the century-old lighthouse,  that is really beautiful.

Only avoid the winter season. All other season has its own beauty. 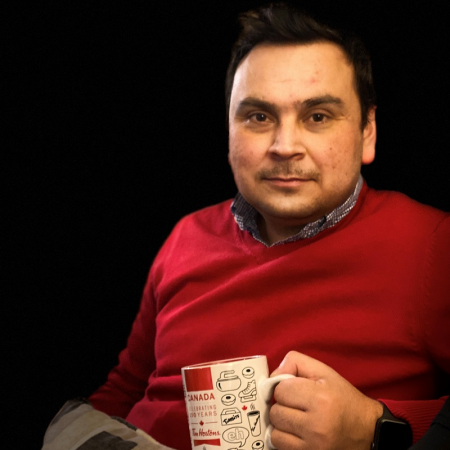